You have innate creativity.  People often wonder ‘Am I Creative?’.

The answer is a resounding yes.  One of the things I have learned as a meditation and transformational coach is that creativity is part of the human experience.  In fact, creativity is a birthright of being human.

Creativity is within everyone.

I firmly believe that there is an artist in each of us.  BUT, what is really interesting is that most of us have allowed this amazing ability within us to atrophy through lack of use.

Creativity is in every one of us.  It not only invokes both the artistic but also the analytical. It takes creativity to not only create music but to develop the technology and device to play it.

Can we conclude that anyone, anywhere can be creative?

The answer is yes, absolutely.  Each person’s creativity is unique, like a fingerprint.  Your tools for creativity are personal to you. Creative thinkers come in all forms. And creativity is needed in every aspect of anything that is birthed and becomes real in the world.

Each step in a creative process calls on us to imagine, to adapt, to make something our very own.

The way you dress, communicate, work, decorate your home, think, behave and shop each call on your unique creativity. 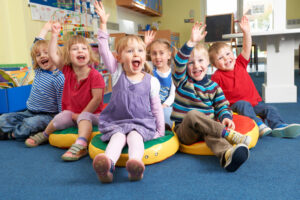 Early on in your life, you were probably encouraged to explore, ask questions and be curious.

If you have ever had a toddler in your life, you find yourself encouraging the wonder and awe that is part of seeing things in the world for the first time.  As toddlers, the adults in our lives showcased the world around us and pushed us to make discoveries.   Look at this!  See this!

Early in life, we all have the capacity to stretch our curiosity.

When you were five years old, you were hugely creative and imaginative.

But, if you are like most people, as you went through school and then later work, you stopped accessing those abilities. 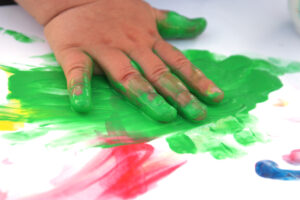 I learned about a fascinating study that made me think about my creativity in a whole new way.

George Land was a scientist and author who studied the enhancement of creative performance.   He devised a methodology for NASA to help select innovative engineers and scientists.  The assessment worked so well that he decided to try it on children.

In 1968, George Land and his associate, Beth Jarman, conducted a research study to test the creativity of 1,600 children ranging in ages from three-to-five years old who were enrolled in a Head Start program.

The results were so astounding, that they decided to do a longitudinal study and they re-tested the same children at 10 years of age, and again at 15 years of age.

These results blow my mind: 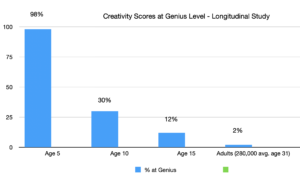 And the same test was given to adults who averaged 31 years old; what would you guess the percentage was that scored at a genius level.  2%

“What we have concluded,” wrote Land, “is that non-creative behavior is learned.”

The way we are educated in traditional schools fosters this loss of creative ability.   The reason is that most teaching methods encourage us to both generate and judge ideas in the same process.  Most schools don’t separate out those two very different types of thinking processes.

According to Land and many more recent neuroscientists, there are two types of thinking processes when it comes to creativity:

Convergent thinking: where you judge ideas, criticize them, refine them, combine them and improve them, all of which happens in your conscious thought.

Divergent thinking: where you imagine new ideas, original ones which are different from what has come before but which may be rough to start with, and which often happens subconsciously

Throughout school, we teach children to try and use both kinds of thinking at the same time.

When this happens, the judgmental and critical part of our brain kills off the new original ideas before they even have a chance to be fleshed out.

As we learn to excel at convergent thinking–or the ability to focus and hone our thoughts–we squash or suppress our instinct for divergent, or generative, thought. 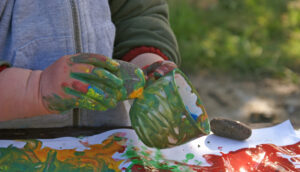 The 5-year-old in us never goes away, though and we can reclaim some of that natural creative capability we had.

In my Creativity, Imagination, and Innovation course, we dive deeply into this.   You learn ways to foster both of these processes in ways that allow for the best ideas to see the light of day.

Remember: Creativity isn’t reserved for certain people who are more inspired or unique, it’s in us all just waiting for a chance to emerge.

If you would like to learn more about using more of your creative potential, check out my course Creativity, Imagination, and Innovation. 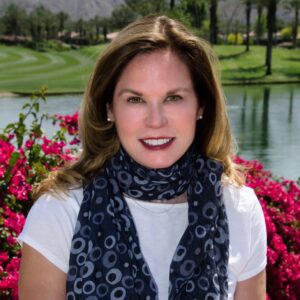 Watch my YouTube video; Are You Living Up to Your Creative Potential?

Watch my YouTube video; Play Teaches You to Be More Creative 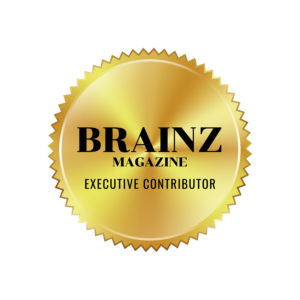 Jane Ramsey is an Executive Contributor for Brainz Magazine

Find out more about Jane Ramsey